After a flight delay of 24 hours, along with spending more time in San Jose than I’d intended, by the time I reached the Caribbean coast of Costa Rica I was desperate to find the perfect beach spot to relax.  Being in a hurry to slow down is never going to work out well though! 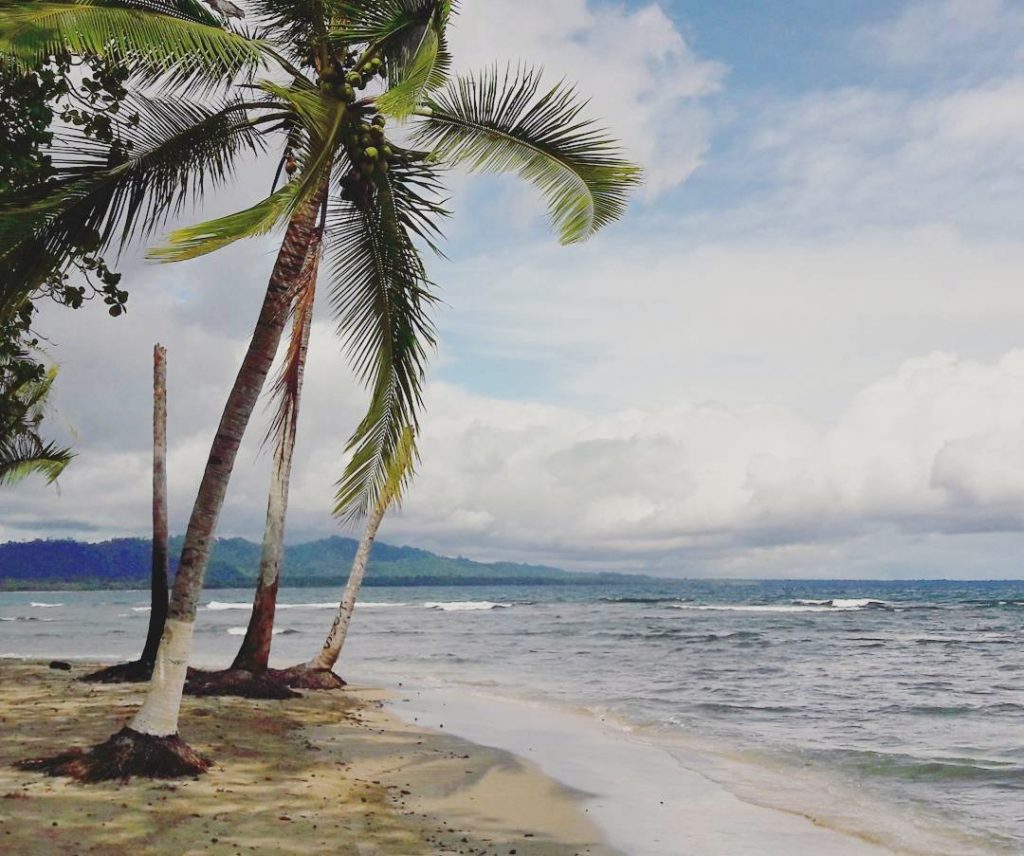 I was exhilarated but exhausted after surviving the first stormy night in my new tent, and was impatient to find some comfort and tranquility by the sea.  Light cloud and a breeze helped cool the oppressive heat in Puerto Viejo that day, ideal conditions for lounging on the beach had I already been feeling relaxed.  There were trees overhanging the water, providing much needed shade, and I could walk for miles without seeing a single person. 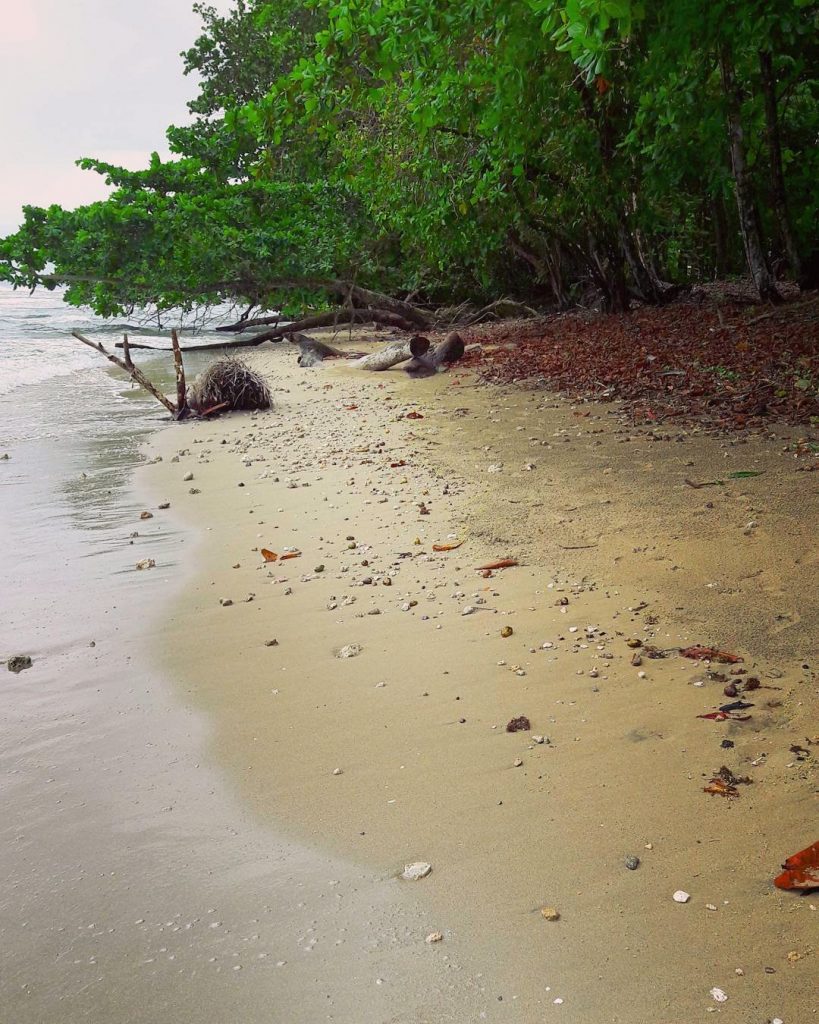 But my tired mind couldn’t perceive the perfection I later discovered to have existed the whole time.  I just wanted to rest, but couldn’t seem to settle at all.  The fallen trees were beautiful, but they were in my way.  The roar of the ocean was hypnotic, but the unpredictable waves and sharp rocks made swimming a less than relaxing challenge.  I wanted to lie down, but couldn’t find a place where my aching body felt safe from all the bugs who made their homes in this rugged paradise.

I soon realised it was me, not my idyllic Caribbean surroundings, that was the problem.  I could either give up on the day and head back to my tent, or I could embrace this amazing place and allow myself to be at peace with it.  I decided to slow down and stop looking for the perfect spot to relax, and instead just take a gentle stroll along the shore.  I allowed myself to walk, with no objective other than absorbing the unique natural beauty of this untamed area.

With nowhere to be, I enjoyed clambering over the fallen trees.  The sound of waves crashing over rocks no longer represented the danger and difficulty of swimming, but became a constant soundtrack to my meditation.  Instead of being worried by bugs, I marvelled at how the dead logs and leaves provided a home to so many creatures.  Instead of sharp stones and shells bringing me discomfort, they created patterns in the sand, infinitely adding to the beauty of the beach, rather than detracting from it.

I paused to rest in a tree that was hanging over the water.  The branch was low enough that my feet dangled in the waves as they lapped the shore.  The tree bowed under my weight, but effortlessly supported me.  It swayed with the wind and my movements, and debris in the water rushed past my feet.  Pebbles struck at my ankles, but in the comfort of the tree I enjoyed the sensations. 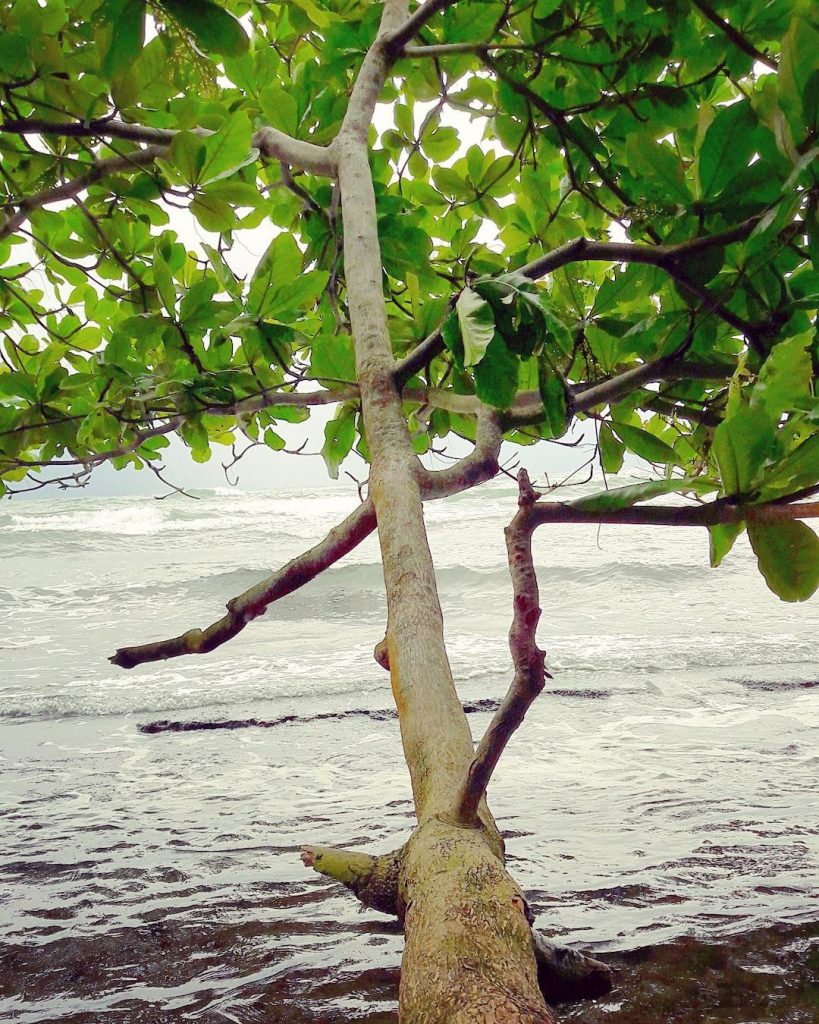 Satisfied that I had found inner peace again, I made my way back to the spot where I had begun my walk.  The soft sand seemed so much more inviting than before, and I lay down in total comfort to gaze up at the maze of leaves and branches above me.  Finally I could completely relax.  I lay still for quite some time, observing the flickering patterns of light created by the lush green leaves. 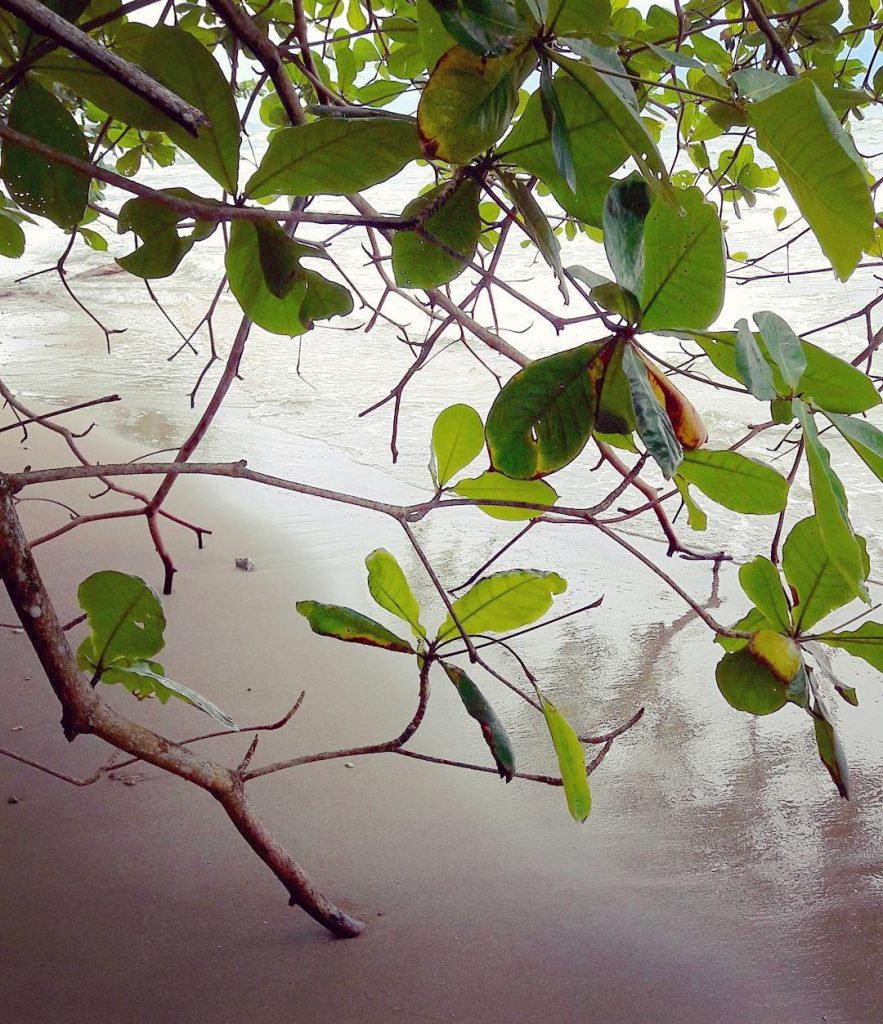 Then my heart fluttered as I noticed an unusual movement high up in the tree tops.  I saw the dark outline of what appeared to be several baby monkeys creeping through the interwoven branches.

I have no idea what species they were, but I’ve only ever seen monkeys in busier areas where they cheekily play with and steal things from tourists, providing much amusement.  These monkeys seemed to be much gentler creatures, and they moved carefully and gracefully, without a sound.  I would never have spotted them had I not been in such a tranquil state, looking up at the sky in total stillness and peace.

After a while a friend came to join me and we watched the monkeys together.  We talked quietly while I gazed at the shimmering light on the water as the day drew to a close.  Leaves rustled, and crabs came out to dance on the beach.  At one point it felt like we were surrounded by an army of them, and were they not such amusing creatures I would have been slightly afraid.

The wind picked up and large seeds began dropping from the tree above, almost hitting us on the head.  We looked at the fallen trees all around and decided not to take any chances of being squashed by the extremely overhanging one we were sitting under.  I retreated inside, grateful for my time on this slightly wild and fascinating stretch of coastline. 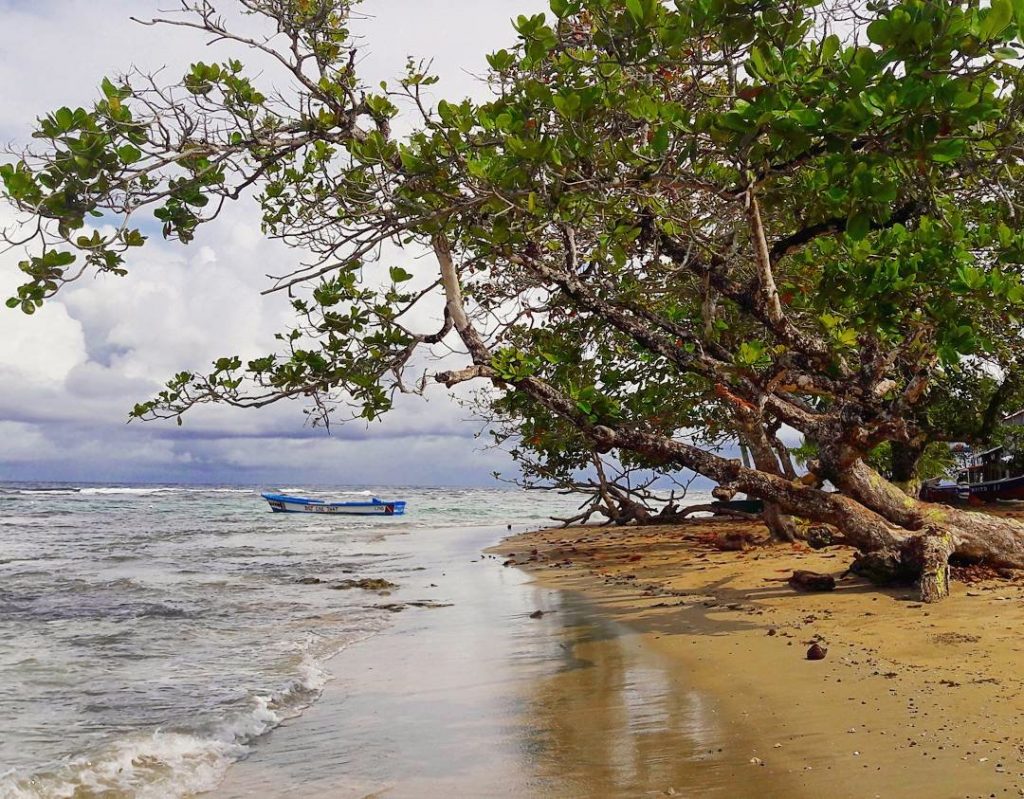 It hadn’t been the immaculate, serene environment I’d originally been craving, but what I’d discovered was far more precious than that.  By embracing nature rather than retreating from it, I had received the priceless gifts of peace of mind, and monkeys!

I think we can learn to be a lot more patient and accepting of our circumstances by spending time outdoors in unpredictable environments.  Learning to smile in the rain, sun, wind or when covered in dirt is an awesome life skill to have, and can give us a greater sense of freedom.  It’s so easy to get stuck in our comfort zone though, I do so on a daily basis!  If you have any inspiring experiences you would like to share, or any nuggets of wisdom, please leave me a comment below 🙂