My time in La Fortuna was far from perfect.  I got very sick, spent way more money than I intended to, and missed a lot of the things I went there for.  However, my overall memory of it is shrouded in a hazy dream-like wonder.

As I stepped off the bus I was welcomed to town by this little guy, whose magical doggie healing properties made carrying my heavy rucksack up the hill to my hostel much more bearable! 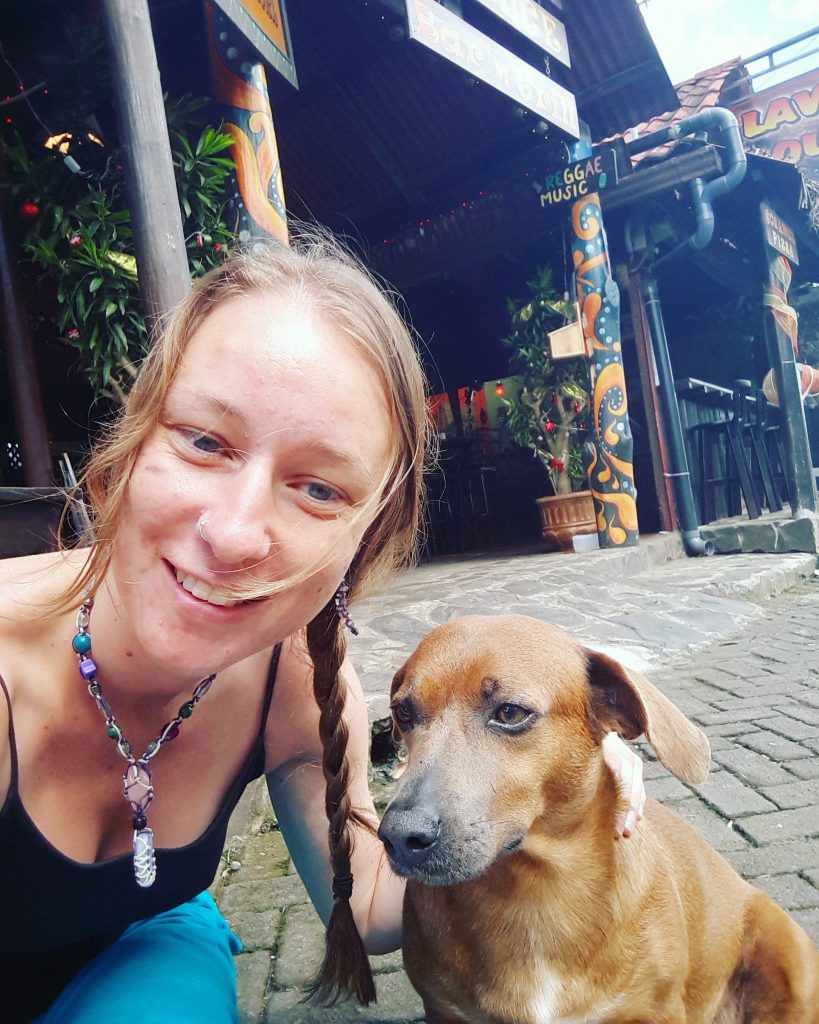 I had no plan for La Fortuna, so happily went along with some other backpackers for a whirlwind tour of the region.  I was so lucky to be driven around in a car all day, stopping when we wanted to, exploring the area and checking off some of the major sights.

When we arrived at the hanging bridges in Arenal, I felt like I’d finally arrived in the Costa Rica of my imagination.  The forest was packed with excited tourists, and it was pouring with rain, but I was high up amongst the tree tops at last.

I paused on the bridge, feeling it bounce slightly beneath my feet.  It was a strange and unforgettable sensation, being suspended in the canopy, enveloped in mist, held in the embrace of the rainforest. 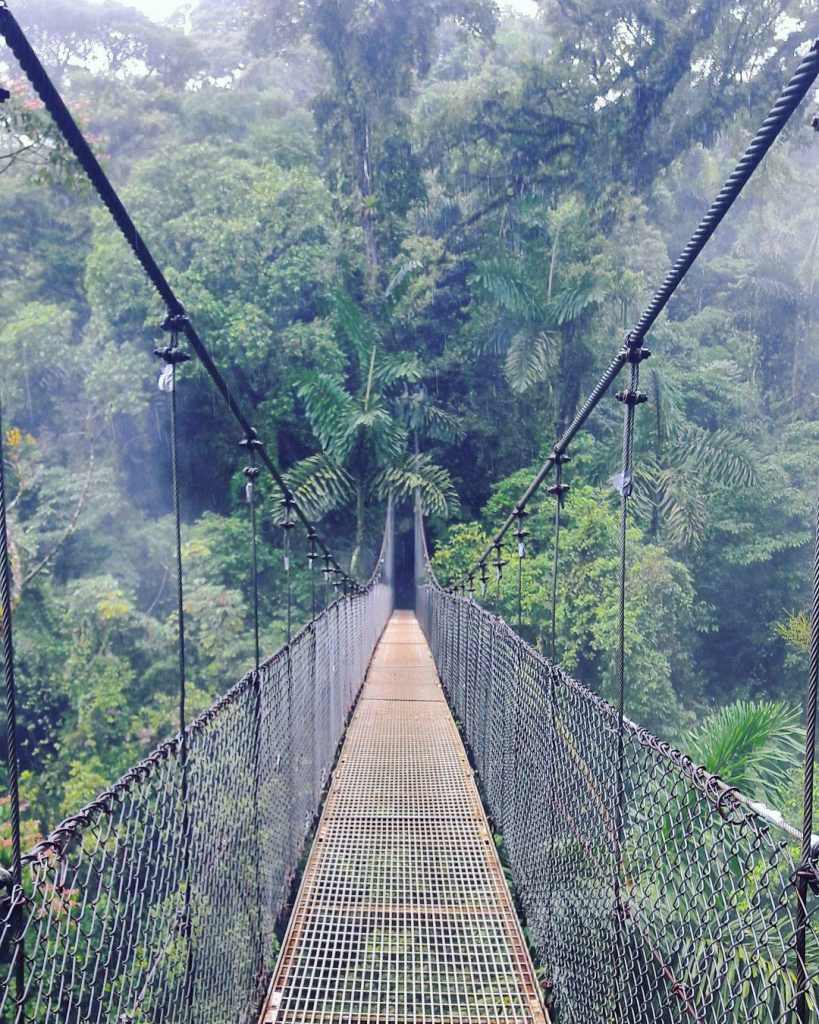 Unfortunately, the mist that made the forest all the more beautiful, hid the famous Arenal volcano from view.  We drove through the trees over winding bumpy roads in an attempt to get closer and perhaps catch a glimpse.  At one point a faint outline began to appear through the cloud, only to disappear again for the next few days!

Whilst waiting for the volcano to show, I passed the time at possibly the best hot springs resort in the world.  I spent an entire evening at Baldi Hot Springs with friends from the hostel, and the next day I went back again alone to soak up more of the blissful magic!

I can’t recommend highly enough visiting hot springs at night.  It’s like a lucid dream that is too perfect to be real, and you’re enjoying far too much to wake up from.  With 25 thermal spring water pools, there was always something new and amazing to discover as we made our way through the dark steamy oasis. 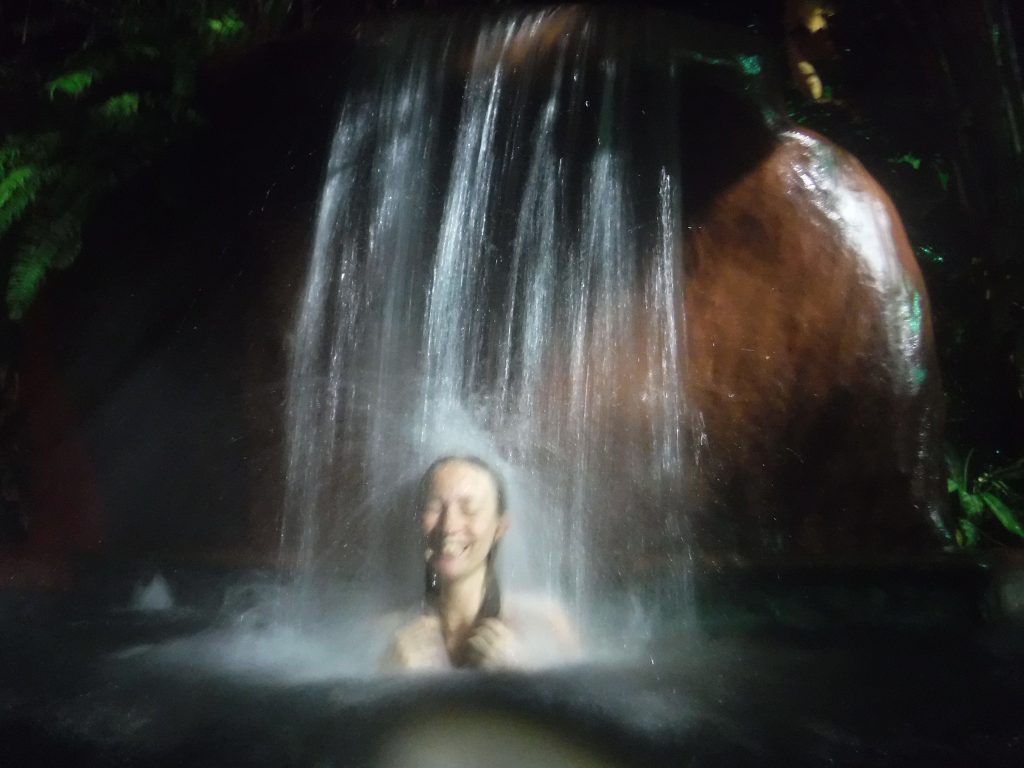 That’s not to say I wasn’t utterly mesmerized in the light of day by the sight of cascades of water filling crystalline pools, surrounded by lush vegetation.  My heart was full to bursting as I explored every corner, feeling all the muscles in my body relax into the hot soothing water. 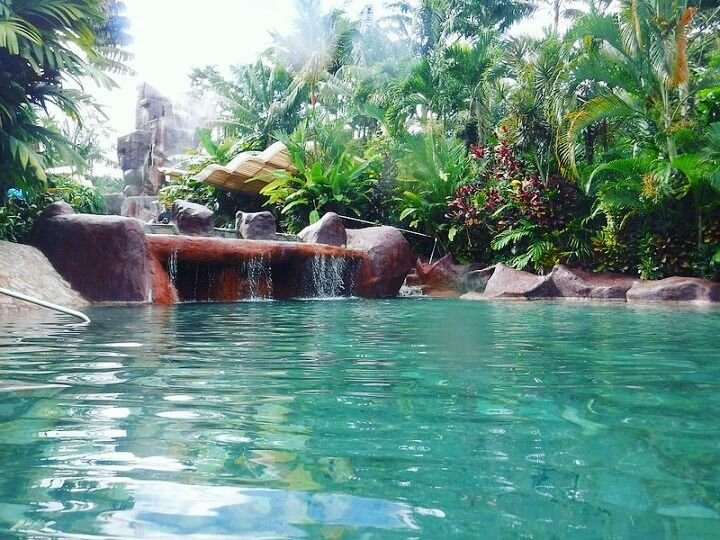 From floating in paradise, to drifting away in a strange and troubled sleep, I found myself in bed sick for the next couple of days.  So much for the ‘healing’ properties of the spring water!  It was difficult to be annoyed though, as after camping and staying in dorm rooms, a rest in my own private room was just what I needed!

Covered in thick cloud, I’d given up hope of catching sight of the elusive volcano.  I’d almost forgotten it was there, and I certainly didn’t realise I had a view of it from my balcony!  So on my last day in La Fortuna, as I was lazing in bed, I was awestruck when the clouds parted to reveal the mysterious, slightly threatening peak. 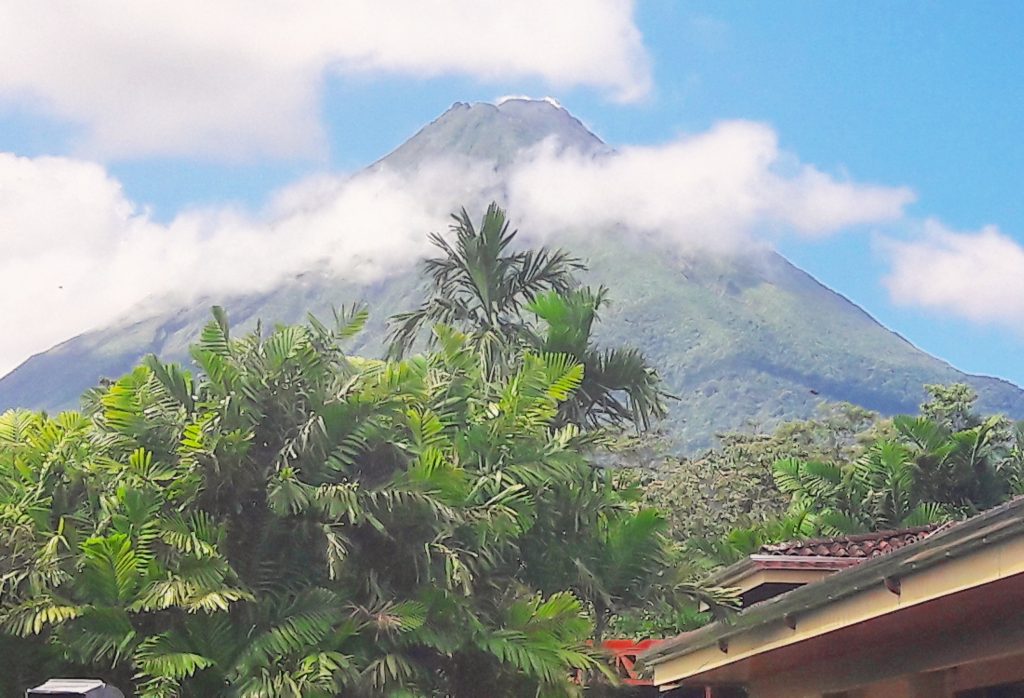 What an amazing treat to be lying in bed with such a view.  It was almost worth getting sick for!  However, having spent a small fortune and recovered enough to travel, it was time to leave this popular yet mostly hidden wonderland.  Frustratingly, there was so much more to discover in this area of geological wonders, but I had already spent far longer than I’d planned to there.  The cloud closed over the volcano again, and it disappeared, as though it was all a dream.

Where do you go when you dream?  Have you been somewhere so magical it makes you feel like you are dreaming, even though you are awake?  Leave me a comment below 🙂